What is best value Hosted Desktops or On Premise servers?

This is a question every one considering cloud hosted desktops will ask and the answer may be different for every business and will depend on many factors.  What is critical though is to really take into account some of the hidden costs and hidden benefits and try and put a price on them.

In this article I will start with a simple financial comparison before including things that are less easy to put a number against, such as how much is it worth to your business to not have any downtime.

To keep things simple I’m taking a common scenario, a small business that needs to share a database application between 10 employees.  An example might be Sage 50 Accounts.

Calculating the hosting cost with Your Office Anywhere is easy.  This scenario is a straight £28.50 per user per month.

This includes the hosting fee as well as Microsoft Licences for Windows and Remote Desktop Services.

Calculating an equivalent price for an on premise solution gets a bit tricky because it depends on where you’re starting from, what internal skills you have, how often you expect to replace the system, what your appetite for risk is and so on.  To try and make a comparison I’m going to base it on a typical scenario from our experience of businesses of this size.

The on premise solution includes buying an entry level server with 5 years next business day support and includes Windows Server Essentials and Client Access Licences for 10 people; a simple cloud backup solution; plus setup and installation costs which assumes the server is also being used as a domain controller and includes migrating users to the new domain.  When working out total cost of ownership of an on premise server it is also important to include things like power and anti-virus solutions.   The other really “wooly” thing with an on premise solution is support, it’s impossible to predict what issues you will hit in the future, so I’ve based this comparison on a simple support contract with an IT provider at £100 per month for 1 server support.

As this is an entry level system there are a few things I haven’t included which I would normally highly recommend such as an Uninterruptible Power Supply (UPS), dual hot-plug power supplies and  RAID1+5 disk array (I’ve just priced for RAID1).   So really this is a bit on the low side but I wanted to be as impartial as possible.

So, which is cheaper Hosted Desktops or On Premise?  Well, if you are just looking at 1 year then clearly Hosted Desktops.  If you look over say 5 years then it starts to equal out, except that in 5 years you are probably looking to replace your server, upgrade your domain and buy latest versions of the operating systems and CALs.   Effectively a very similar outlay to what you just spent.

The diagram below compares Hosted Desktops with On Premise for the scenario above and assumes you replace your servers and operating system licences every 5 years (the peaks in the light blue line).  The comparison is over 12 years and shows the annual cost plus an accumulative cost over that time.  For simplification this doesn’t take into account inflation, which will affect both options fairly equally. 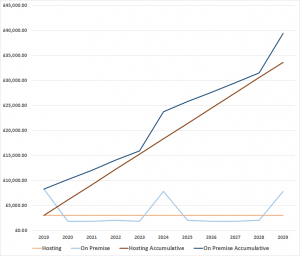 It’s important to state that as the user numbers increase the numbers get closer together till you reach critical points, for example at 26 users you need a different edition of Windows Server.  As numbers rise you may also want additional memory, or go for the more fault tolerant options mentioned earlier.  Maybe a second server and so on.

The next thing to compare are the intangibles, things that it’s hard to put a price on because you can’t predict the future.

I mentioned earlier that there are certain tipping points where you may want different Windows Server editions or higher server specification.   If you had enough information about your business growth to predict this at the beginning then you may have paid a slightly higher upfront cost, paying for more hardware than you need at the outset, but just paying for additional CALs as numbers increase.   The onsite server gives you flexibility to increase user numbers to a certain extent with only minimal increases to operating costs.   If however, this is unexpected growth then you may need to effectively throw away the licences or hardware you paid for and replace it with the next model up.

Also consider the implications of growth being slower than predicted, maybe the high spec hardware you bought becomes old and obsolete by the time you get to fully utilise it.

Conversely if you’ve bought this extra hardware and extra CALs and then your business hits a bad patch and you have to reduce numbers you are stuck with this extra resource; you can’t go back to Microsoft for a refund and you certainly won’t save money by selling your server on eBay and getting a cheaper model.

This is where the beauty of pay-as-you-go cloud computing comes in.  With a Hosted Desktop service you only pay for the number of users you need in any one month.  Flexing up and down with the needs of your business.   You don’t need to predict the future you can add on dozens of users almost instantly, and remove them a few months later with no wasted investment.

From an accounting point of view many companies will prefer the benefits of low monthly hosting payments from an operating budget over an upfront capital investment, depreciated over time that sits on the balance sheet.

We mentioned earlier that the specification for the entry level server in the comparison fell short of what would be considered a fault tolerant system.  Higher priced systems will include battery UPS to avoid permanently damaging the server in a power cut, and redundant power supplies for the same reason.  Hot plug disks would also be recommended so that faulty ones can be replaced without downtime and with no loss of data.

When you use a Hosted Desktop solution then the “High Availability” and “Disaster Recovery” options are at another level entirely.  Yes the servers still have redundant power supplies, but so does the whole data centre.  There are still battery UPS but these are also backed up by diesel generators keeping the data centre powered up indefinitely in the event of a local power cut.

The servers are virtualised and on a hardware cluster meaning if the underlying physical server suffered from any hardware failure the guest servers instantly move to another host, with no disruption.

Offsite data backups are taken several times a day.  Servers are protected by central Anti-virus management and the same applies to Windows updates.

Multiple internet connections with different providers are in place to again reduce the risk of service interruption in the event of a failure with one provider.

Does this enterprise level infrastructure come at a price? Well because this infrastructure is shared by everyone the economies of scale mean that individually the costs are negligible.

In my comparison I estimated a figure for an IT support contract of about £100 per server for an on premise server.  With a Hosted Desktop the server support is included in the price and helpdesk support is available 24/7 for critical issues.

Back to the question at the start of the article, what is the cost to your business of downtime?  No matter how good your local IT support or the hardware support contract you have with your hardware vendor, if something breaks you will have downtime.  With a Hosted Desktop solution a lot of things have to break before things stop working, you would expect to have a Service Level Agreement guaranteeing 99.5% uptime.

It is important to mention that every situation is different, for some businesses a few days downtime may not cause a problem, for others a few minutes will cause major disruption.   At Your Office Anywhere our technical sales consultants are experienced in implementing on premise solutions as well as Hosted Desktop so can help you make the right decision for your business.