Choosing a cloud solution for your business that’s both flexible and cost effective.

There are a bewildering assortment of terms being bandied about in the Cloud computing world, particularly in 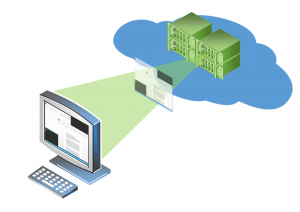 reference to running your whole desktop in a hosted environment: Hosted Remote Desktop, Virtual Desktop Infrastructure (VDI), Hosted Applications, Desktop as a Services (DaaS), but if you’re in the process of considering what it the best cloud solution for your business you need to know that these technologies are not necessarily the same.

Virtual computing is inherent in all the technologies we are discussing, the ability to run multiple “Guest” operating systems on one physical “Host” computer.  Virtual Desktops are individual guest operating systems running on a 1 to 1 (user to operating system) basis from a central server or server farm.   The desktops behave like any desktop running on a physical PC, and will typically run a desktop operating system such as Windows 7, 8 or 10.   Profiles and data are usually stored centrally.  Virtual Desktops enable the users to logon on to any computer and connect to their unique desktop.  Deployment of new desktops is therefore usually very quick and local hardware can be very basic, often just thin client terminals.  While there are many cloud providers who supply cloud hosted versions of VDI they are more common in large corporations managing their own IT infrastructure on site.

Hosted Remote Desktops are very different.  Instead of one virtual desktop operating system per user Remote Desktops will typically use Windows Server operating systems and may have several dozen users on one powerful server.  These desktops generally use Microsoft Remote Desktop Services (previous known as Terminal Services) to present a Windows desktop to the user and will look and feel very similar to a real or a VDI desktop.  The only difference to the user is that they are on Windows Server instead of on say Windows 10.   The user is seldom aware they are running on a different operating system and the applications the users run work exactly the same.

Hosted solutions are usually provided on a monthly subscription basis allowing user numbers to change from month to month as required by the business.

Hosted Applications and Remote Desktops are two sides to the same coin.  At the backend everything is the same, the only difference is how the user connects.   A Hosted Application removes the “desktop” wrapper of a Remote Desktop, all the user sees are icons for the applications they want to run.  When the application starts it feels no different than if it was running locally on the PC.   The applications can also be launched from a web portal, especially handy if you are on a strange computer such as in a hotel.

Hosted applications are often used by software vendors as a way of supporting the sale of their software by removing the need for their customers to buy local servers.   Hosted Applications can also be supported by additional hosted infrastructure such as Hosted SQL Servers, Web servers, or fast network storage, all from the same data centre network guaranteeing performance.

Desktops as a Service

DaaS is again one of those terms that is used for different technologies.  It can be used to represent a VDI solution if cloud hosted, but is more typically associated with Remote Desktops.

Which is the best solution?

Of course the answer depends on the individual business, but Remote Desktops have some very significant advantages in the following areas:

Whilst the above benefits provide a strong case for Remote Desktops over VDI, especially local VDI it is important to consider the following factors when choosing a provider:

Read More About Our Remote Desktop Service & Contact Us Today

For more information on how cloud technologies can benefit your business you can read more about our Remote Desktop service online or alternatively you can fill our our online contact form or call us on 01282 500318.