How to easily, efficiently and with no re-coding run Microsoft Access on a MAC

The picture opposite was reproduced from Microsoft’s pricing page for Office 365.  The point to highlight is the text below the Access icon saying: “PC Only”.   Microsoft don’t do a version of Access for Mac or iPad or even Android 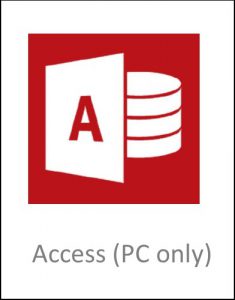 Chances are if you’ve developed an Access database application then you have a Windows PC anyway, so what’s the issue?

Well, what if you need to share your Access application with colleagues, and what if those colleagues are using a Mac or other non-Windows device?  What if your boss wants to check something from his iPad at home?

Microsoft have developed a Remote Desktop Client for Mac, iOS and Android, as well as Windows. This means that if you run your Access database from a Hosted Desktop it can be used by users of any device just as easily as those running Windows.

What is a hosted remote desktop service?

Remote Desktop Services, previously called Terminal Services is a technology that enables applications to be run on the remote desktop server instead of the user’s PC (or Mac). Lots of users can log on to the remote desktop server and run the same applications simultaneously. The system was designed mainly to help organisations with remote sites that needed to run applications where the data, documents or databases are at a central location. It’s a bit like having really long keyboard, mouse and monitor cables.

With the recent improvements in internet speed as well as other technologies such as server virtualisation it is now easy to host the Access database with a service provider rather than pay to build and maintain the technology yourself.

Beyond the ability to run Access on a Mac or iPad, hosting it gives you a number of other benefits:

You can see that running your Access database on an iPad or Mac or easy and effective using hosted remote desktop services. To find out more about how to get your Access database in the cloud to run on a Mac contact one of Your Office Anywhere’s technical sales consultants who can discuss your individual requirements and provide you with a demonstration. Call today on 01282 500318 or complete the form at our contact page.