As a leading provider of Access database hosting in the UK, we have been waiting keenly to see what the changes would be in Access 2019.  Now it has been released we can provide some detail around what’s new in Access 2019 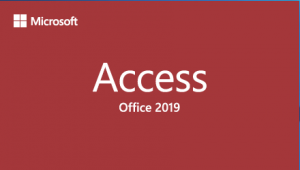 Released in October 2018 Access is available either as a perpetual licence with Office Professional 2019.  It is also available as part of some Office 365 Plans with the exception of E1 and Business Essentials, although it is only available for PCs, not other devices.  It can also be rented as part of a Hosted Access solution under Service Provider Licence Agreement (SPLA).

First of all it’s important to mention that subscribers to Office 365 may well have seen many of the new features already, as some have been included with updates.   This may be a hint to how Microsoft will be treating Office in future.  A bit like Windows 10 where no new versions are released, but new features are added with updates, it may be that Office 2019 is the last version and in the future it will simply be Office 365.   Possibly the perpetual licence becomes a thing of the past.

So, on first glance Access 2019 looks and feels very similar to 2016 and 2013.  Users familiar with either of these versions will not need to go back for re-training.

The biggest new feature is the introduction of Modern Charts.  Anyone who’s used previous versions will know that the inbuilt charts look so old fashioned you almost get a sense of nostalgia.  The new charts are more akin to those found in recent versions of Excel. 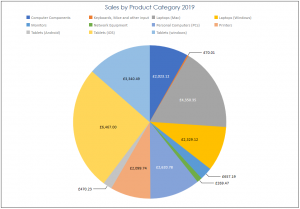 Formatting of charts is done using Access property sheets, and the fairly intuitive Chart Settings pane, so is a bit different than say formatting charts in Excel. The ability to change the chart colours or themes does seem to vary depending upon the chart.

If you’re upgrading from an older database version don’t worry, all the old charting features will remain so you can use the new charts alongside the “classic” charts enabling you to move to the new charts as and when you want to. 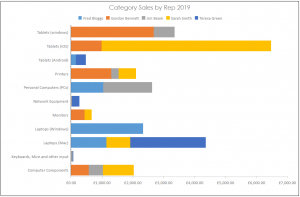 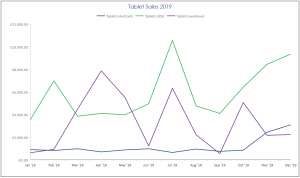 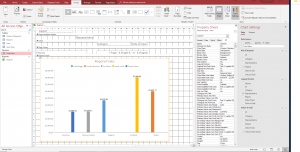 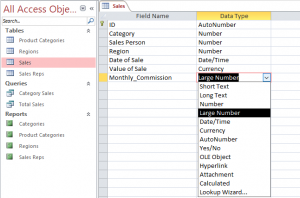 Be careful when setting this data type as it will mean the database is no longer compatible with previous versions of Access and it is non-reversible.

Having this Large Number data type means you can link or import from SQL Server databases that use the BIGINT data type.  However, you will need to enable support for linking and importing operations by setting the “Support Bigint Data Type for Linked/Imported Tables”.

Users with visual impairment who use assistive technologies such as Windows Narrator will see a number of improvements.  The following functions can now be recognised and read:

A number of other improvements for Narration have been made including:

There are also some improvements to forms, reports, buttons, tabs and dialog boxes when displaying in High Contract mode.

Another accessibility improvement is a new Control property called “Label Name” so you can associate a label control with another control.   This ability helps assistive technologies detect and highlight the association.

Connectors to Salesforce and Microsoft Dynamics 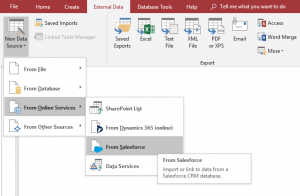 As well as including in this section existing sources such as SharePoint Lists and Data Services, they have now included sources for Salesforce and their own Dynamics 365.

In previous versions of Access if you had a value list where you can Edit the list on the fly there was a little icon at the bottom of the list that you could click to edit.  New for Access 2019 you can simply press CTRL + E when on the box on the form and it will bring up the Edit List Items dialog box.

A couple of other things to mention that are new in Access 2019.

There’s some improvements to Help in that the “Tell me what you want to do” box has been updated with improved content.

And finally, something that personally I welcome, Microsoft have made the clickable areas around the borders of table objects in Query design windows so it is much easier to resize.  Previously trying to hover over edges and corners to get the resize arrows could be wearisome.